Having a child who reads years in advance of their biological age is tricky but also very interesting.  We choose to spend a lot of time seeking out appropriate book choices and selected for sweetness and innocence (in the early years), quality writing including complex language structure and emotional/moral ambiguity (not all black and white) as well as thoughtful, complex characters (progressively so with maturity). 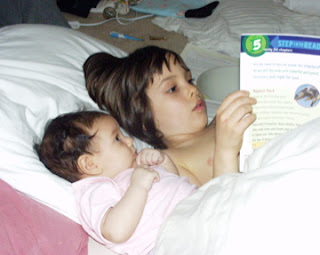 When our first was very young we also chose to avoid all Disney (mostly for gender-stereotyping reasons), traditional fairy tales (as some are kind of gruesome), and anything violent or mean-spirited (which includes a surprising number of children’s book).  When he was about three years old my mom gave him a copy of Chicken Little and was surprised when I said “thanks” and then put it in a box.  I think she felt a mixture of admiration and irritation when I explained that I didn’t want to impress upon his young psyche that “the sky is falling”.

As he got a little older we also tried to fend off the typical banal and snarky young people’s books for as long as possible though at a certain age we felt he was less effected his love of reading quality lit pretty much untouchable so sometimes let him veg out to Captain Underpants and Lemony Snicket. 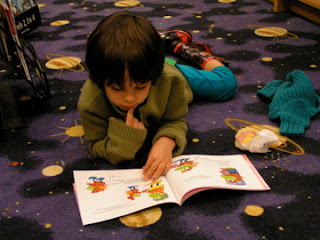 It’s my belief that very young kids cannot filter for themselves and so I like to do the filtering for them.  They can’t process violent or scary material and once it’s in you can’t take it away (though of course you can use it as a learning/discussion/processing opportunity if you’re aware of it).  Essentially, you can’t un-ring a bell.  So I just try to keep the inputs positive and then be sure to raise awareness about those things that do get through the filter.  I think without vigilance in this regard, kids (especially early readers) can easily be consuming a steady diet of mean-spiritedness, violence, darkness, pettiness, conformity and fear, before they’re ready.

When I raise my opinion on this, I often hear the argument that “kids need to work through their demons and ogres, monsters and evil stepmothers in books are a safe way to do so…”  All in good time, I say.  Just like swimming… I want my kids to be able to survive and have fun in the water but I don’t want to throw them in the pool to make it happen.  There’s so much time to learn to deal with the big world; I prefer to fend it off until their personalities are formed more fully and they have a base sense of security in themselves and the world.

A friend with a younger early reader recently asked me how we nurture our child’s love of reading and support his continued development and I’d say that a big factor has been that we’ve always read to our kids and continue to do so, usually a step or two above where they were able to, or likely to read on their own, even it that means reading and discussing adult fiction.

This is just my opinion for my kids, and in support of others who choose to filter material for their kids; Of course, I recognize and respect that not everyone has the time or inclination to do the same.  We all make the best choices for ourselves and our kids.  And of course, as they get older, everything changes...
Posted by LisaBL at 12:15 PM